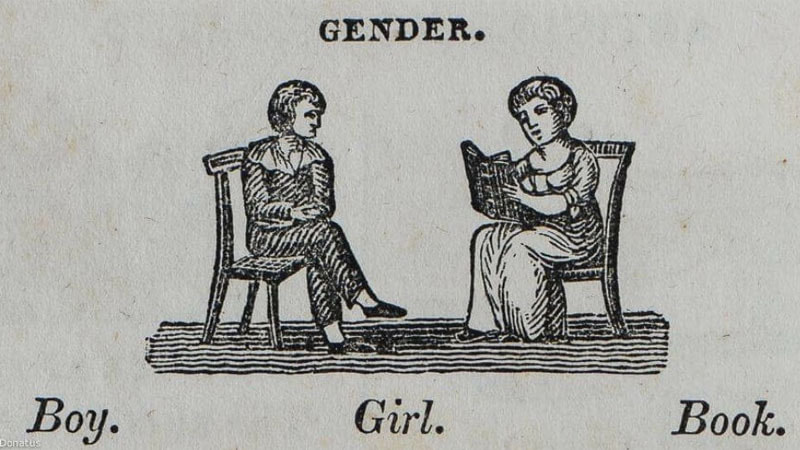 "Ah yes, the three genders."  The meme started as a joking response to things like a trio of airport signs labeled "Men," "Women" and "Telephones," or an application form whose options are "Male," "Female" and "Business."  Over time, it was extended to refer to any group of three things.  In the case, the three genders are metal, wood and skin — the three materials that pair with the vibraphone in the piece's three movements.  The title is also a playful nod to my and the performers' queerness.

"Metal" (featuring cymbals, bells and chains) consists of three versions of the same tune, in three wildly different styles:  haunted music-box lullaby, chill-out jazz, and Very Fake Early Music.  "Wood" (featuring woodblocks and shakers) is a perpetuum mobile with a habit of getting stuck.  "Skin" (featuring drums and mouth sounds) is the longest and maybe the strangest, with dissonant, sensuous chords that keep getting diverted into blurry polyphony or staggering polyrhythms.
Ah yes, the three genders  is an exciting work for Spectrum Ensemble. Written for vibraphone and multiple-percussion, Spectrum Ensemble has worked closely with composer Alex Temple on the creation of this piece, from instrumentation to some of the concept (though most of that was entrusted solely to Temple's brilliant mind!) to edits/workshopping along the way.

The result is an intriguing work that keeps the audience constantly engaged with contrasting characters, textures, and moods over the course of about 10 minutes. Temple lets us show off our performance abilities in the first movement, which goes from spooky music box to disorderly jazz nightclub to "Very Fake early music" (a term coined by Temple, which we love). The second movement is a driving motor which gets interrupted and morphs over time, often seeming to be repeating itself but with subtle shades of difference. The last movement begins and ends in a meditative place, and ventures to some fabulously weird places in the middle.

In separating the percussion instrument families into Metal, Wood, and Skin (albeit with some interesting takes on that idea, like using tongue sounds as skin percussion), Temple seems to be following the precedent set by composers like Xenakis. She cleverly subverts expectations, however, with the double-entendre introduced by the title of the piece. Thus "Ah yes, the three genders" serves as both an intriguing addition to the percussion repertoire, and a challenge of our societal preconception of what gender is.

We'd like to express our deepest gratitude the following people for joining the consortium for the commissioning of this piece. They made this great piece of art a possibility, and we can't wait to hear some of their performances of the work!
Brian Calhoon
Scott Charvet & Elayne Harris
Emily Durocher
Beth Gunderia
Carla Lackey
Modern Marimba
Kathleen Rieken
Julie Taber
The Up:Strike Project - Directed by Dr. Matthew Lau & Karen Yu
Gloria Yehilevsky